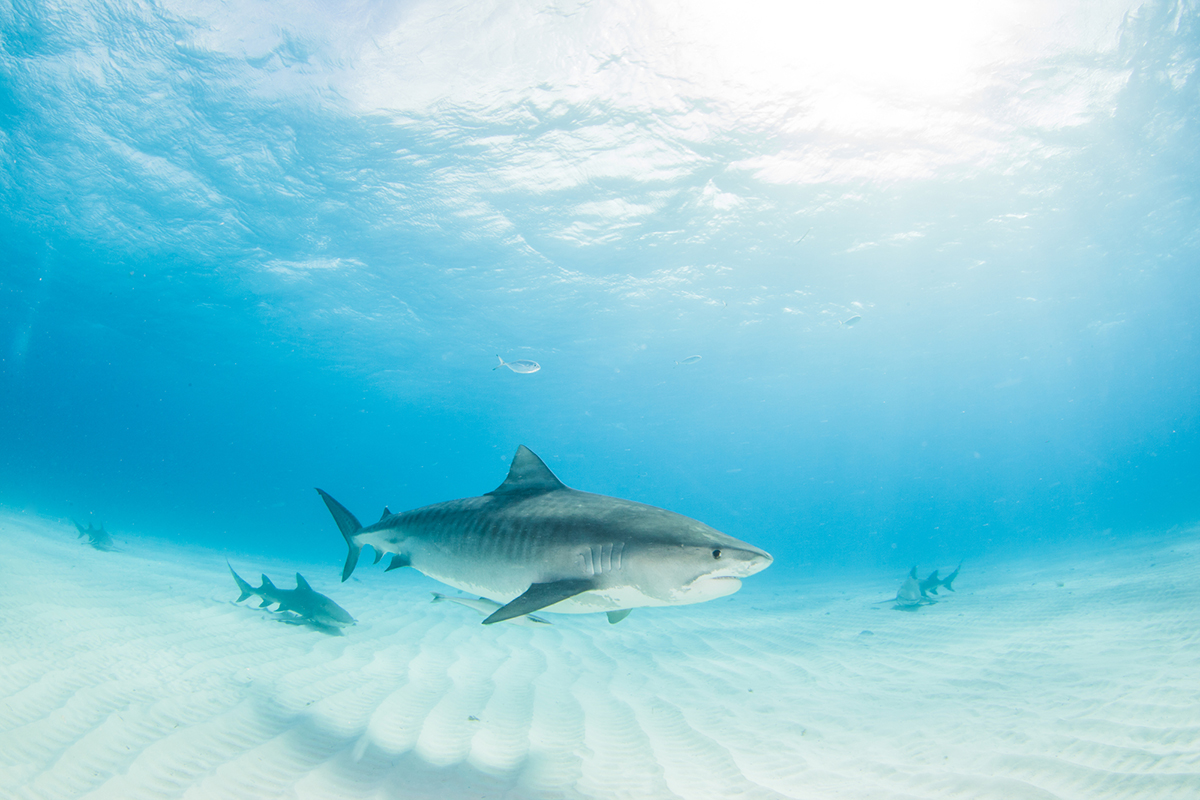 Here’s the short-and-sweet answer to the question posed in the title: Yes, for sure there are sharks in Destin (well, offshore, anyway).

In fact, Destin’s liquid neighborhood—from Choctawhatchee Bay and Destin Harbor to the open waters of the Gulf of Mexico—provides an excellent and varied habitat for a diverse roster of sharks.

That may sound terrifying if you’re hoping to hit up some of those exquisite white-sand Emerald Coast beaches or go hang out at Crab Island, or tool around the bay on a stand-up paddleboard. But the reality is that the danger sharks pose has been grossly overstated (particularly since the 1975 release of the legitimately great—but fictional—Steven Spielberg film Jaws).

(Speaking of, here’s a little toothy cinema trivia for you: Jaws 2, the first of a number of not-so-great sequels to the original, was filmed right around here—at Navarre Beach, in Choctawhatchee Bay off Destin, and a few other spots right in the vicinity.)

In this post, we’ll profile some of the more common and notable sharks found in Destin’s local waters, try to more concretely spell out your risk of being attacked, and drill down on some tips for minimizing that already-small risk. Let’s “dive in,” shall we?

From oyster reefs and sandbar shelves to deepwater wrecks and vast pelagic reaches, Destin’s estuarine and seawater ecosystems provide habitat for an impressive variety of native sharks: large and small, abundant and rare.

Our imaginations tend to leap to big, even huge fish when we think of sharks, but in reality, the majority of the world’s several hundred shark species are most definitely on the small side. Two common sharks of our inshore waters are a case in point: the Atlantic sharpnose shark and the bonnethead, both enthusiastic hunters of small fish and crustaceans, and both typically reaching a modest two to four feet long as adults. Bonnetheads are pintsized hammerhead sharks, and it’s not unusual to see Emerald Coast surf-casters hauling them in on the line.

A bit up the size spectrum, the most common medium-sized shark along this Gulf coast is typically the blacktip shark: a swift, agile member of the “requiem shark” family that may gather in large numbers when migrating or pursuing major baitfish schools. Blacktips are usually four or five feet long or so. A relative and close lookalike, the spinner shark, tends to grow a bit larger; it’s named for its dramatic habit of corkscrewing out of the water while hunting fish and squid, an acrobatic behavior the blacktip sometimes engages in as well.

If you see a speedy dorsal and caudal (tail) fin slicing the nearshore waters from a Destin-area beach—or catch a glimpse of a gleaming shark launching bodily into the air—it’s likely a spinner or a blacktip. These sharks may hunt in close proximity to swimmers, though more often than not the people never even notice them.

There are two bigger and burlier requiem sharks not uncommon in Destin’s nearshore and inshore waters. One of them is the bull shark, a bulky beast that may occasionally exceed 12 feet in length and weigh 800 pounds or more (though most specimens are smaller). Bull sharks are well known for their ability to tolerate brackish and freshwater, and they occasionally swim far up rivers. They feed mainly on fish (including other sharks), but also take crustaceans, squid, seabirds, sea turtles, and occasionally marine mammals.

Bigger yet is the tiger shark, the largest of all requiem sharks in fact; very big “tigers” may approach 20 feet in length and weigh more than a ton, though most are in the 10- to 14-foot range. Sporting broad and powerful jaws and heavily serrated teeth, tiger sharks pursue a famously undiscriminating diet, feeding on everything from fish and crustaceans to sea turtles, seabirds, dolphins, seals, and garbage.

Another hefty shark sometimes seen around Destin is the aptly named great hammerhead, which occupies the other end of the hammerhead size scale from the bonnethead: It can reach a similar length as the tiger shark. Nearly as impressive as the great hammerhead’s wide “hammer” is its tall, knife-like dorsal fin.

While it’s more common in southern Florida, the tawny-colored nurse shark—a member of the “carpet shark” family that occasionally grows more than 14 feet long—is sometimes spotted by snorkelers and divers off the Emerald Coast, resting on the seafloor or drifting around wrecks.

How about “Jaws” itself, the notorious (and magnificent) great white shark? Well, though it’s not nearly so common a species in these waters as the above-mentioned sharks, great whites do cruise the Gulf of Mexico, and occasionally pass through Emerald Coast waters. In February 2020, for example, a one-ton female white shark tagged the year before off Nova Scotia came within a few dozen miles of Destin.

How Dangerous are Destin’s Sharks?

Sharks are spectacular predators, no question, and even the smaller species tend to come well-armed with strong jaws and a bristling set (or, rather, sets) of teeth. But as we said at the outset, sharks suffer from an undeservedly bad reputation as bloodthirsty, “man-eating” monsters.

Actually, your chance of being attacked by a shark (let alone killed by one) are minimal compared with falling victim to a whole slew of other hazards, including being struck by lightning, injuring yourself with a household tool, or being assaulted by a dog. Sharks are well down the list when it comes to things to worry about when enjoying the Destin area’s waters: You’re in much greater danger from drowning, rip currents, and boating accidents than those sleek predators.

Florida has seen a bit more than 800 shark attacks since 1882: more than any other U.S. state, it’s true, but in the big scheme of things quite a small number. While shark attacks have risen in recent decades, experts stress this is surely due to ever-increasing numbers of people entering shark habitat—not any change in shark behavior.

For the most part, sharks don’t seem to attack people to eat us, but rather out of either self-defense (as when overly curious diver corners, say, a nurse shark) or mistaken identity, which may happen when a person is swimming among schools of fish being actively hunted by sharks. According to the Florida Museum of Natural History’s International Shark File, Florida, each year sees an average of about 20 to 30 “hit-and-run”-style shark attacks: typically minor bites that seem to represent sharks mistaking the foot or hand of a swimmer or surfer for a fish. It’s thought that most of these nips come from blacktip, spinner, and blacknose (another smallish requiem shark) sharks, which commonly hunt small fish close to Florida’s beaches.

Our area’s bigger sharks, including bull, tiger, and great hammerhead sharks, pose a greater danger, but nonetheless attacks by them are extremely rare, and even these hefty species don’t seem to normally view humans as prey. (They’d rather rustle themselves up a stingray, a tarpon, or a spiny lobster.)

You can further reduce your risk of a shark attack by following some simple (and generally common-sense) steps. Here are a few basic tips:

What if you actually see a shark while swimming or diving? Well, staying calm is essential. Maintain your position or, if it’s possible, ease out of the water, but avoid making a bunch of movement. More than likely, the shark will either completely ignore you or simply “buzz” past out of curiosity.

If you’re diving and a shark repeatedly approaches you, maneuver yourself either back-to-back with fellow divers or against a reef, wall, or some other structure. Attempt to slowly exit the water, preferably bunched with other divers, while keeping your eyes on the shark.

In the unlikely event, a shark swims at you aggressively or even bites hit it on the nose or claw at its eyes or gills. Such a forceful response will typically convince the shark that you’re not a defenseless fish and that it ought to seek easier quarry elsewhere.

The risk of being attacked by a shark is so low that fear of these underwater predators should by no means stop you from swimming, fishing, paddling, and otherwise enjoying Destin’s lovely bays, inlets, and open Gulf of Mexico waters. Sharks perform an essential ecological role and can be truly thrilling creatures to see in the wild: They should be objects of fascination and admiration, not terror! 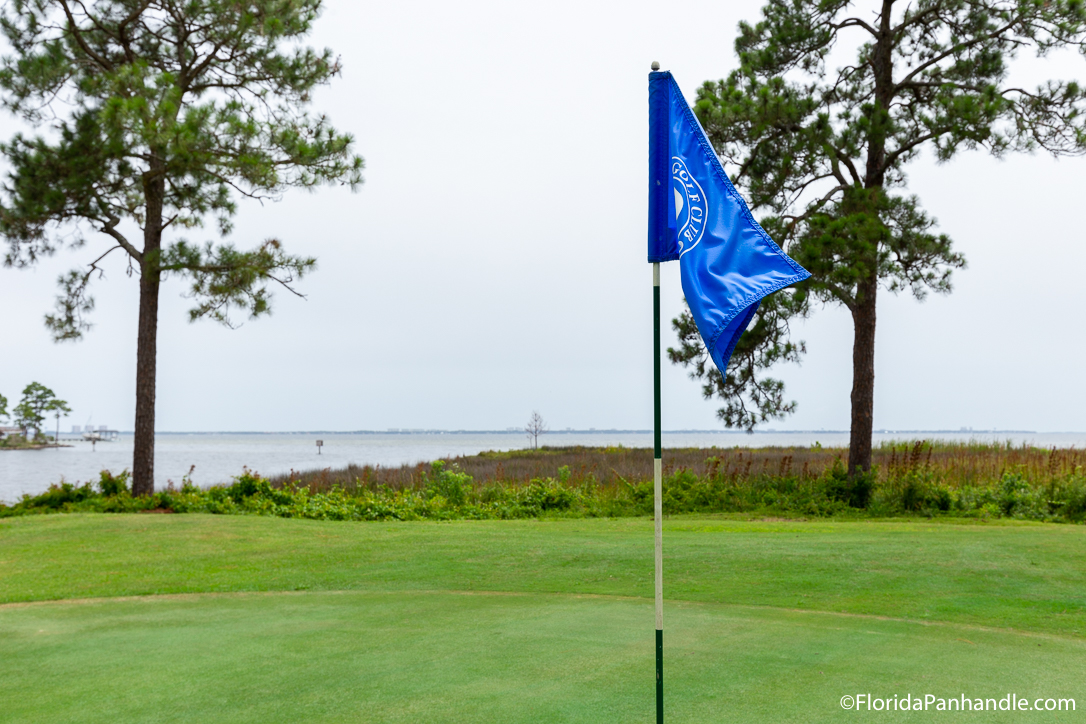 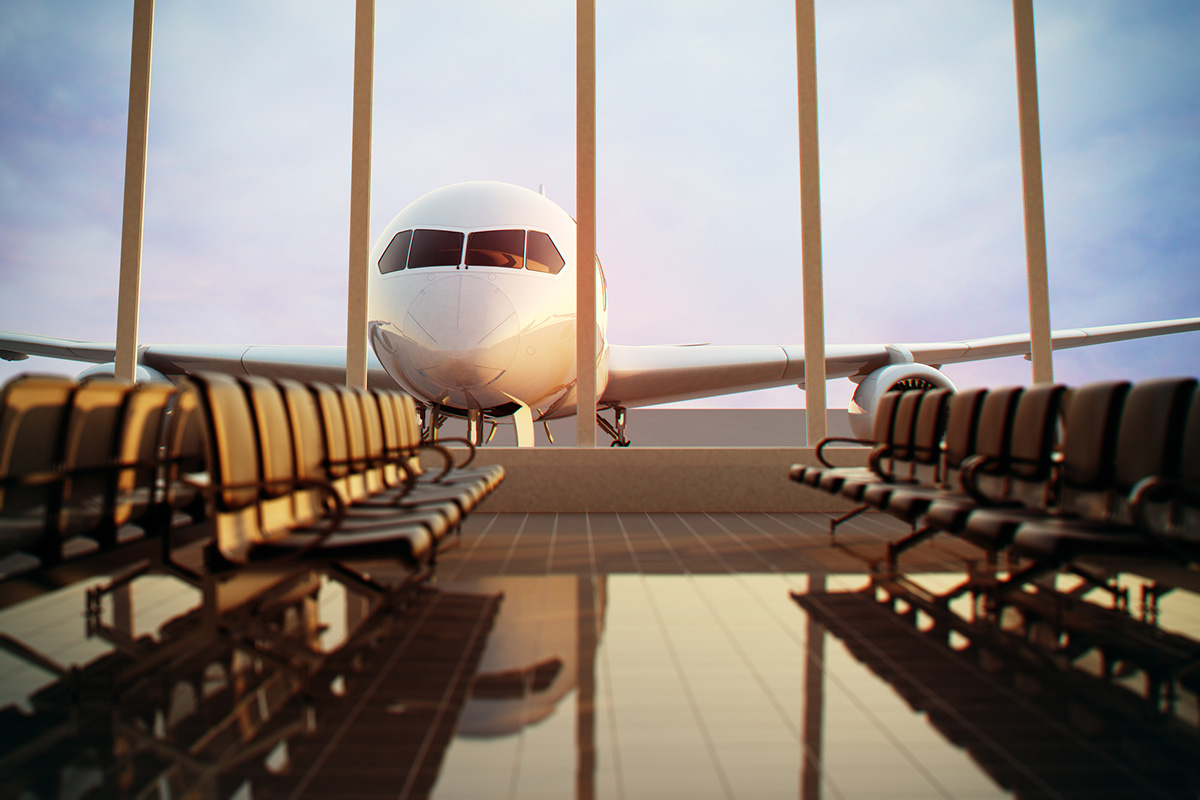 Flying to Destin: Which Airports are Closest?
August 31st, 2020 by Vicky Reddish