790 on the Gulf boasts some of the best views of any restaurant in Destin, what with its beachfront perch and seascape backdrop. And what better to go with such an Emerald Coast vista than brunch, lunch, or dinner centered on fresh seafood?

Dine at 790 on the Gulf, and you’ll be set smack dab on the Destin, Florida beachfront on the ground floor of The Inn at Crystal Beach. The flavors on your tongue, meanwhile, will be taking plenty of cues from cookery a bit farther west down the coast: namely, Louisiana.

The Cajun-inspired cuisine here includes a goodly assortment of gumbos: Duck and Andouille, Crawfish and Shrimp, and Chicken and Smoked Sausage, all served in proper style with white rice. No worries if you can’t choose one: The Louisiana Gumbo Sampler lets you try the full trio, backed up by some crusty French bread.

Other plates rich in Big Easy spirit include the New Orleans Muffaletta sandwich and the Old Time Shrimp Poor Boy (aka “po’boy”).

You might also opt for the Louisiana Crab Cakes, or the Grouper Acadiana, which dresses up a pan-blackened Gulf-grouper filet with the kitchens’ Crawfish Etouffee and presents the whole package atop Andouille Yellow Rice. (The Gulf grouper’s also available in sandwich form, by the way.)

Louisiana gastronomy, of course, includes plenty of nods to French cuisine, which explains one of 790 on the Gulf’s richest entrees: Napoleon’s Chicken Marengo, apparently invented by Napoleon Bonaparte’s personal chef in 1800 on the heels of the general’s victorious Battle of Marengo. This concoction features pan-sautéed chicken breast cooked together with tomatoes, garlic, black olives, onions, and mushrooms in a white wine sauce primed with butter, oregano, and basil.

Besides the gumbos, sandwiches, and entrees, you’ve got on hand such starters as Sesame Crusted Seared Tuna, Crab Corn & Potato Bisque, Baked Lobster & Shrimp Parmesan Dip, 790 Fried Avocado, and Hurricane Shrimp, which tosses good-sized fried shrimp in the restaurant’s sweet and spicy Hurricane Sauce and serves them with ranch dressing.

You can quench your thirst here with all manner of libations, including local craft beer, fine wines, and cocktails (including the bottomless mimosas of brunch).

It’s worth noting that 790 on the Gulf offers, in addition to nightly dinner specials, a daily happy hour with some tempting deals on both food and drink.

Time to highlight a few 790 on the Gulf dishes in particular!

New Orleans Muffaletta
The muffaletta sandwich is a New Orleans creation with deep Italian roots. 790 on the Gulf’s version sources its bread from the Big Easy—Gambino’s, to be exact—and embellishes the ham, salami, Mortadella, and Swiss cheese with some house-made olive salad.

Baked Lobster & Shrimp Parmesan Dip
A standout on the starters menu, this hot dip makes a killer seafood blend of crabmeat and Gulf shrimp with horseradish Havarti, Monterey Jack, tomatoes, onions, and seasonings. You’ll have some grilled French bread with which to enjoy it.

From share-able dips and fish sandwiches to a French classic once served Napoleon, 790 on the Gulf aims to please—and the seaside views aren’t bad, either!

Insider Tip:
-While you’ll enjoy decent views inside, the finest await you out on the 790 on the Gulf outdoor patio; consider timing your dinner for sunset, which you’ll have awesome front-row seats for. 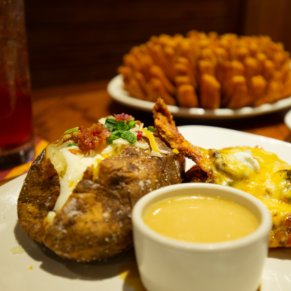 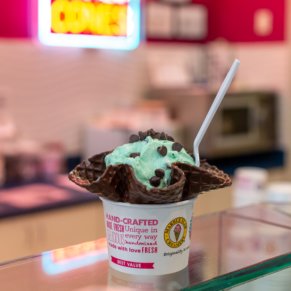 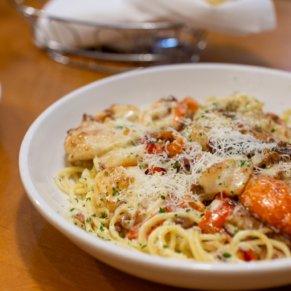