Water Pig BBQ gives Pensacola Beach some awesome beachfront BBQ and one of the area’s standout open-air dining experiences. From the delicious BBQ meats and sides to the killer location along Santa Rosa Sound sands, this place is a real winner!

You may think the only proper accompaniment to a beachfront view along the Emerald Coast is a platter of seafood. Well, think again. Nothing against fresh-catch fish of the day or fried shrimp—nothing against whatsoever—but Water Pig BBQ proves that low-and-slow smoked meats can hit the spot in the sea breeze just as nicely.

Opened in 2020, Water Pig BBQ is a fantastic addition to the Pensacola Beach dining scene. That’d be true based on the quality of the cuisine itself—more on that in a second—but the ambiance and layout also earn the place high marks. This is an open-air beachside restaurant with a spacious deck, lively bar seating, and ready access to that famous sugar sand, with vistas aplenty of Santa Rosa Sound. Location, location, location—and, needless to say, Water Pig has it in spades.

The main attraction, though, is the food, much of which comes out of the two-ton-plus smoker at the heart of operations at Water Pig. The restaurant has no more modest ambitions than serving the finest BBQ in the Sunshine State. We’d say it’s off to a strong start in hitting that lofty goal.

A smoker that can hold some 700 pounds of meat at a go is certainly a prized possession, but it doesn’t mean a whole lot without the expert operation of a champion pitmaster. Water Pig BBQ has that in the form of Steve Seige, who boasts decades of firsthand experience in a variety of regional American styles of BBQ—including the Texas school well on display here—and who’s nabbed top honors at his fair share of competitions.

The meats here include half-pound or one-pound portions of beef brisket, pulled pork, and turkey as well as half or full racks of St. Louis-style BBQ ribs. We’re talking smoked, slipping-off-the-bone goodness.

But from the grilled romaine and the Florida watermelon and feta salads to the homerun sides—from coleslaw and potato salad to BBQ baked beans and street corn—there’s plenty more excellent stuff on the menu than the carnivorous fare alone. (It’s also easy to add your choice of BBQ meat to your greens, giving you—truly—the best of both worlds.) Don’t miss the appetizers, either, which include such must-try items as pork cracklins’ in the house BBQ sauce and a smoked mullet dip served with Old Bay crackers. You’ll see below in our roundup of Water Pig BBQ menu highlights that the sides and starters are actually some of the most worth-writing-home-about eats here.

You can also go the BBQ sandwich route, and Water Pig BBQ also serves a decent burger as well.

The smoky, sauced-up delicacies at Water Pig BBQ should, of course, be properly paired with a suitable beverage. This place takes its cocktails very seriously: Culinary-minded mixology is another main strand of the Water Pig approach. From the daiquiri, raspberry mojito, and pina colada to the Hog Wash Rum Bucket and the Smoked Old Fashioned, the mixed drinks are definitely worth giving a try. You’ve also got a whole bunch of craft and domestic beer on offer in both draft and canned form, plus a decent-size wine list.

Now let’s roll up our sleeves, bust out the napkins, and run down our top recommendations off the Water Pig BBQ menu. We’d actually include all of the main BBQ meats, unsurprisingly; here, we’re going to call out some of the supporting players in the side and appetizer departments that definitely hold their own with the main plates!

Smoked Wings
Good as the ribs, brisket, and other main-course BBQ plates are, you could make an argument that nothing beats the smoked wings at Water Pig. Choose between BBQ or jerk, and drink up the accompanying Alabama white sauce!

Loaded Tots
“Loaded” is the operative word here, with queso, roasted corn pico, and crema dressing up the chipotle-spiced BBQ presentation. These tots are super-shareable but also very easy to aggressively hoard, so you might well need a couple of orders.

Mac and Cheese
Alongside the street corn and the potato salad, we suggest the mac and cheese is just about the all-out star of the fully-loaded Water Pig BBQ lineup of sides. It’s creamy, flavorful goodness to go alongside that slathered half-rack or brisket.

Kick back with a cold beverage and a view of the Sound at Water Pig BBQ, and walk off your Southern feast with a sand-between-your-toes stroll. Does it get any better? 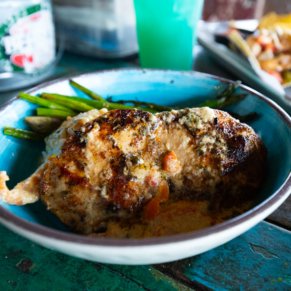 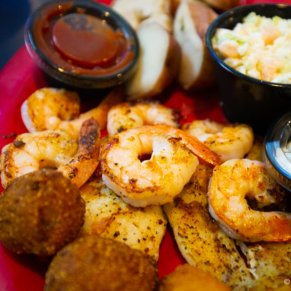 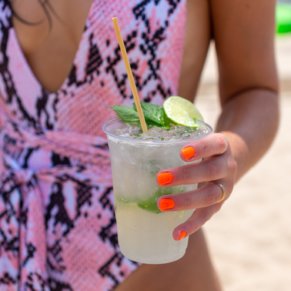