Shaggy's Harbor Bar & Grill in Pensacola is the sort of quintessential beach bar that will lift your spirits and put a smile on your face, even if the day is gray and cloudy. There's no pretense here: The atmosphere is informal. The interior is quirky, fun, and colorful; the deck is expansive and the view is great. Food selections and drinks are plentiful and made to order, and the fun, the sand and the water encourage lingering.

It’s the right kind of place to bring old friends or meet new ones, to try new tropical specialties or stick to old favorites, to eat hearty or grab a quick snack and a tall cool one. Sit inside or out, but plan to come again and again to Shaggy’s in Pensacola! It’s habit-forming.

Shaggy’s in Pensacola is now one of five locations for the beach bar with an island soul that was “born” in Pass Christian, Miss., in 2005. on Pensacola Beach.

Visitors to the Gulf Coast and residents of Pensacola alike love the place, and the penchant for fun extends to servers and kitchen staff as well. All employees will do their part to welcome everyone, making certain that you feel “at home” with the beachy, waterside ambiance. It works!

Gather at stools around the bar or lounge at a rustic table indoors or out. Shaggy’s is family-friendly with a menu, including kids’ favorites, as inventive as it is extensive. You’ll find freshly shucked Gulf oysters and just-caught shrimp of course, but also the “Catch of the Day” — just ask — a signature burger, chicken, pork, and veggie choices, and gluten-free options.

From yummy appetizers and finger foods to the fresh-caught fish, along with scores of options for beer, wine, and cocktails, there’s little chance of going away unsatisfied. And, as we said, you’ll want to return often.

Here are just a few of our favorites:

Oysters
Of course, if oysters aren’t your thing, there are plenty of other options, but we love ’em fresh and naked, and Shaggy’s oysters served that way are about as close to perfection as we have found. They’re served with lemon, horseradish, and cocktail sauce, and they’re cold and plumb with just the right amount of brine. The grilled oysters are baked in butter, with lemon and herbs, topped with parmesan, and served with garlic bread for dipping. They’re delicious if you prefer yours cooked.

Corona-Rita
If you’re of legal drinking age (as we are!) go ahead and order one of these!. They go down easily, and the unique blend of traditional Margarita and the upside-down Corona is a great refresher when the Florida sun is sizzling!

Fried Green Tomatoes
This Southern treat can quickly become an obsession, you won’t go wrong by ordering them at Shaggy’s. They’re flavorful, served with a slightly tangy sauce, and light enough to allow you to order an entree without feeling overstuffed!

The Shaggy’s Cheeseburger
We actually couldn’t fathom at first why so many people rave about the Shaggy’s Cheeseburger when there’s so much fish and seafood to savor. But then we tried a bite — and understood perfectly. With a “topping bar” for the basic half-pound burger that includes such taste-tempting options as grilled onions, jalapenos, avocado, fried shrimp, and bacon jam, along with a variety of cheeses, and onion rings or potato salad — all between the bun — what’s not to love?

Green Goddess Shrimp Salad
Perfectly grilled shrimp, six of them, atop of bed of spinach and romaine and topped with tomatoes, avocado, and slivered almonds, is a fresh take on an old idea. The green goddess dressing has just enough bite to make it interesting. The best part? It’s as healthful as it is delicious!

Beach Tacos
Soft flour tortillas filled with your choice of either grilled fish or shrimp are a perfect treat with a cold beer! For a light afternoon snack, split the order of two and add fried pickles, Jalapeno hush puppies, or sweet potato fries. They’re all heavenly.

Insider Tip:
-With its location right at the edge of the water, this is a perfect place for a family outing. There’s plenty of play space for the kids; you can sip an adult beverage while they play in the sand, safe and in view. The bonus? At outside tables, dogs are welcome as well, and that’s another reason to enjoy Shaggy’s Harbor Bar and Grill in Pensacola. 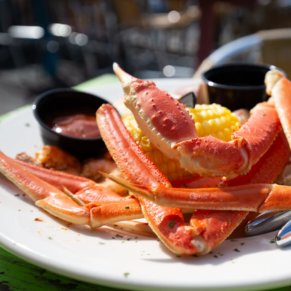 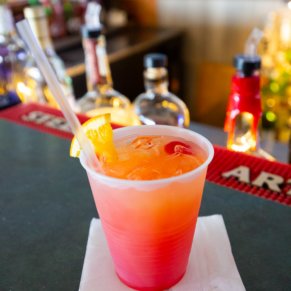 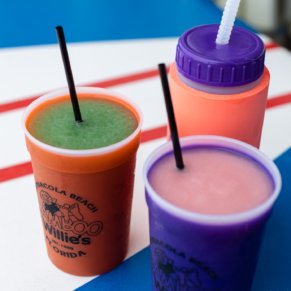