The Fudgery is a purveyor of sugary confections that will delight both young and old. Stop in to indulge your sweet tooth with ice cream, milkshakes, a full array of sundae toppings, frozen yogurt, caramel apples, and of course, the main attraction — fudge.

The Fudgery has been making fudge since 1980 when the retail dessert chain opened its first storefront on the Outerbanks of North Carolina. From the beginning, founder A.C. Marshall sought to use only the very best ingredients to produce his showcase product, heating them in copper kettles and turning the mixture out on to marble slabs to be folded and shaped into loaves.

The concept took off running, and today the Fudgery has locations in over a dozen states as well as an online store.

One of the reasons for its popularity is the Fudgery doesn’t just make fudge and other sweet treats. Its staff also entertains visitors who come to the store by singing show tunes and performing skits while they turn, stir, and fold the fudge. You may even get a whimsical education on the history of fudge making itself.

While, for the most part, these performances are off-off-Broadway, the Fudgery has had a brush with fame. Members of the R&B group Dru Hill got their start while working at the Baltimore location of the store. They performed their fudge-making routine live on The Howie Mandel Show and presented Regis and Kathie Lee with a complimentary box of Fudgery fudge.

If the potential for seeing tomorrow’s big singing sensation doesn’t move you, you’ll love the Destin Fudgery for the feelings of nostalgia and good old-fashioned fun it evokes. Right on the boardwalk, it’s the perfect beachy destination for an after-dinner indulgence.

These tasty treats keep us coming back to the Fudgery:

Homemade Fudge…Of Course!
Shaped into trademark loaves, and made right on-site, the Fudgery has a vast array of rich, delicious flavors, including Rocky Road, Dark Chocolate, Peanut Butter, Maple Nut, Chocolate Caramel, and Cookies and Cream. A.C. Marshall set out years ago to create the world’s best fudge, and we think it’s just possible that he succeeded.

Chocolate-Covered Marshmallows
A wooden skewer of creamy marshmallows forms the center of this diabolical confection. The whole thing is then covered with a thick layer of dark, milk, or white chocolate and drizzled with more chocolate. If you have a sweet tooth, these things are truly to die for, and they make great takeaway gifts.

Ice Cream Sundaes
Who doesn’t love ice cream? At the Fudgery, they not only make their own sumptuous ice cream and custard; they have over fifty toppings so that you can build your own sundae right in the shop. If you’re not in the mood for fudge, this is a great choice.

Pecan Turtles
When you think of a turtle, you’ll probably imagine something that can fit comfortably in the palm of your hand. That’s what we thought, too. So imagine our surprise when we saw one of the Fudgery’s giant pecan turtles, as big as a dessert plate and loaded with pecans. It’s definitely big enough for the whole family to share.

Caramel Apples
Caramel apples are a seasonal fall favorite at the Fudgery. Our mouths watering with anticipation, we sampled the plain caramel, savoring the contrast between rich, buttery caramel and crisp apple. But there are plenty of varieties to choose from, including ones striped with chocolate and covered with colored candy beads.

Insider Tips:
– If you buy three pieces of their delicious fudge or other candy confections, the fourth is on the house. 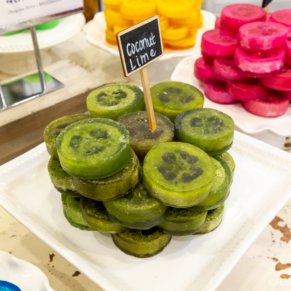